Artwork in the Napoleon Room 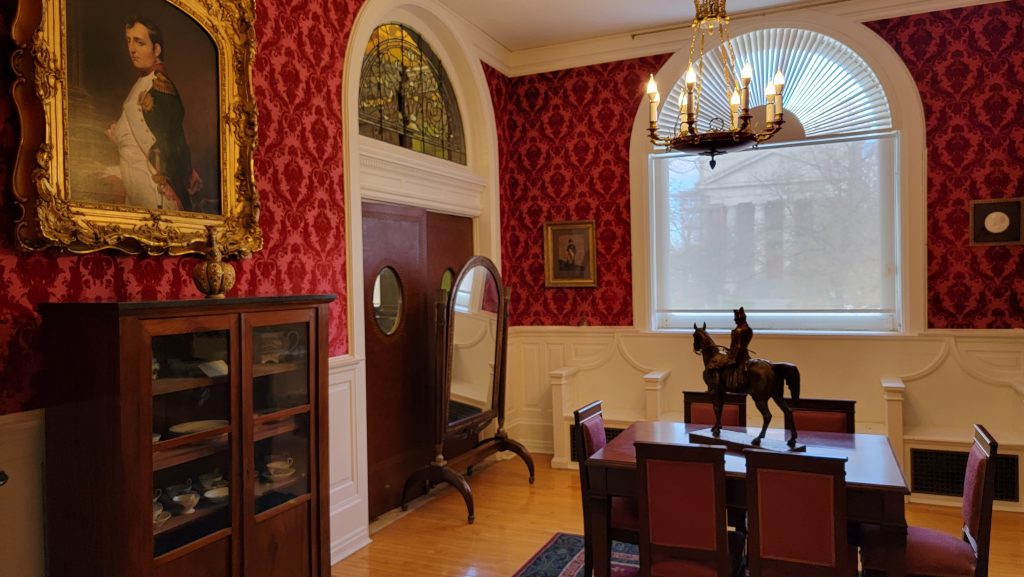 When the library was originally built, the Napoleon Room was the men’s Conversation Room. The room was decorated in a French style due to a strong French influence. Many of the former members of Napoleon’s army settled in Northern New York, and even built a house for Napoleon to live in when he was rescued from exile. But as you know from history, Napoleon was never rescued and the house they built for him, ‘The Cup and Saucer House,’ burnt down. The current Cape Vincent Library was built on the site of the house.

Napoleon’s brother, Joseph Bonaparte, lived in the North Country near Lake Bonaparte for several years. He and his mistress, Anna Savage, becme the parents of Caroline. Eventually, the cold winters proved too much for Joseph and he returned to Europe. 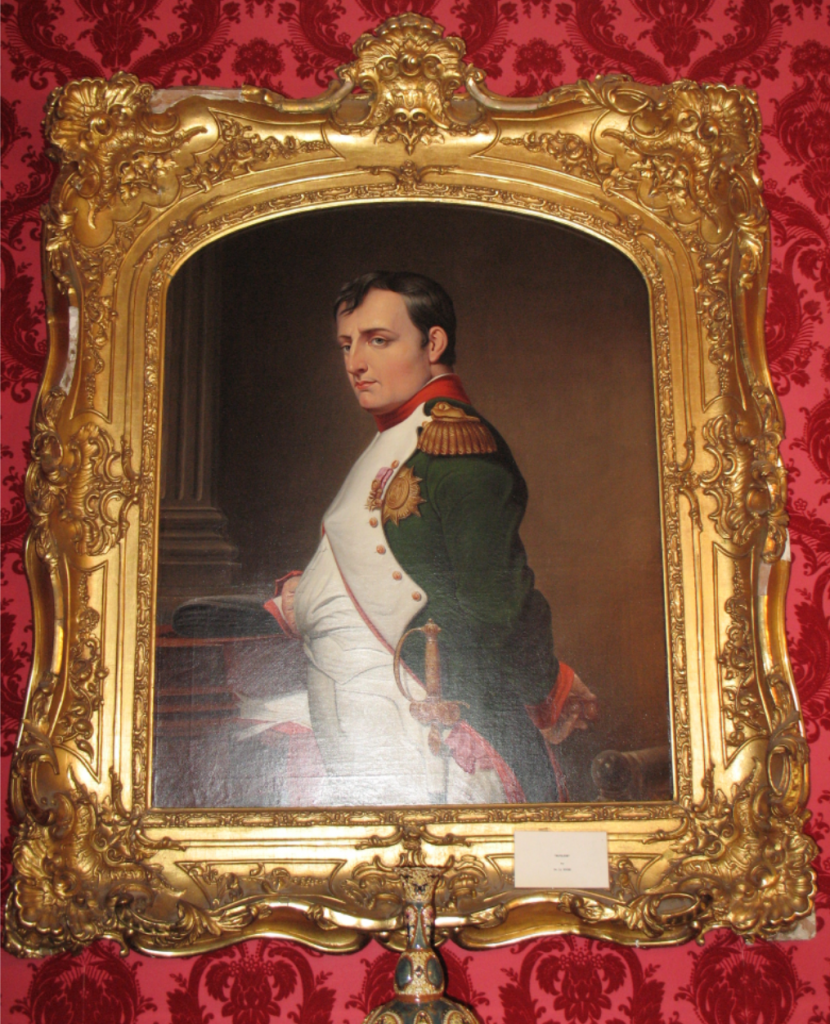 This painting was a gift from Emma Flower Taylor to the library in 1907. The newspaper article state that she “presented the institution with a handsome oil painting, a reproduction from Paul Delaroche’s famous picture of Napoleon Bonaparte, the original of which hangs in Luxembourg Palace.”

Emma Flower Taylor found the rare portrait in Cazenovia on the property of Mrs. Swinelle (Dwinall), in whose family it had been for over 100 years. The frame was re-gilded and the picture varnished.

The artist is unknown but it is an excellent copy of the original painting by Paul Delaroche and was purchased by Dr. Dwinall. 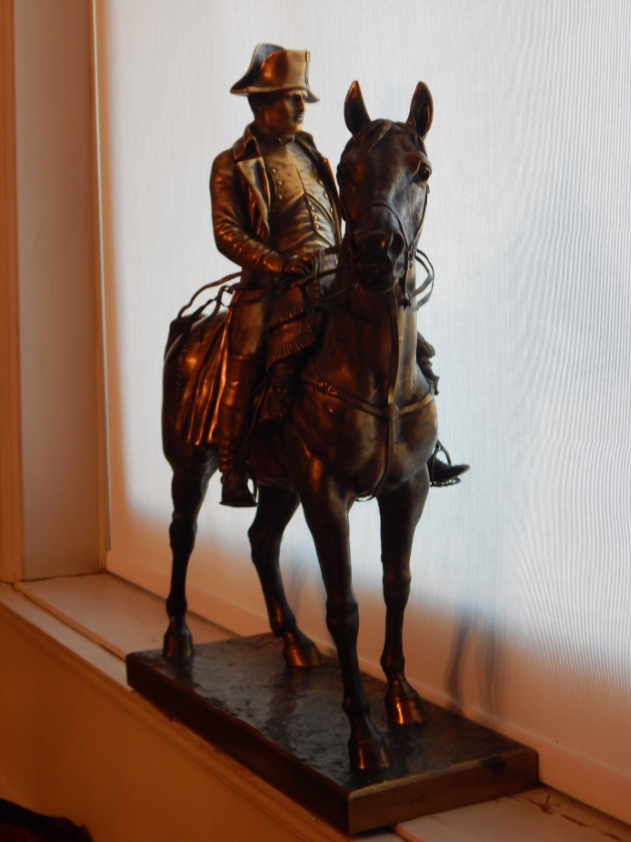 Emma Flower Taylor purchased the bronze sculpture of Napoleon Bonaparte in the French art department of the St. Louis exposition and donated it to the library in 1904.

The sculpture was created by Louis-Marie Moris. The statue depicts a stern Napoleon astride a very proud looking stallion. Napoleon is wearing a long coat, high boots, breast plate, and a vest over high waisted trousers. He is holding a spyglass in his left hand and the reins to the horse in his right. A sword hangs from his left hip and his head is adorned with the classic Napoleonic military commander’s hat. 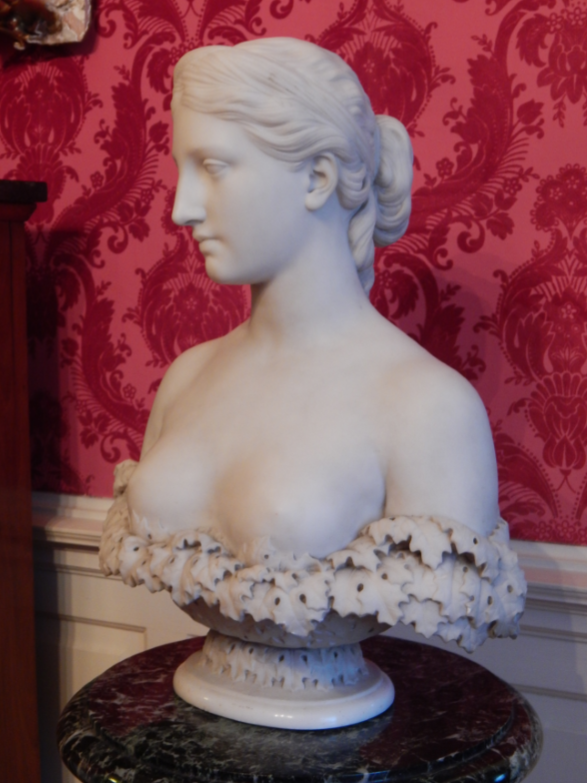 Proserpine, or Persephone, is a character from Greek mythology who was forced to spend part of every year in the underworld. Her absence from Earth was believed to have caused winter, while her return brought spring.

Proserpine was created by Hiram Powers (1805-1873) and was replicated more than any other work produced by an American sculptor during the nineteenth century. Power’s studio carved more than 300 copies. Another of the copies is located in the Smithsonian American Art Museum.

Hiram Powers was born in Woodstock, Vermont in 1805 and died in Florence, Italy in 1873. In terms of fame and success, Powers was the central American sculptor of the nineteenth century. He achieved this through the development, one might say invention, of a style that blended classical idealism, physical immediacy, and appealing subject matter with moral overtones. 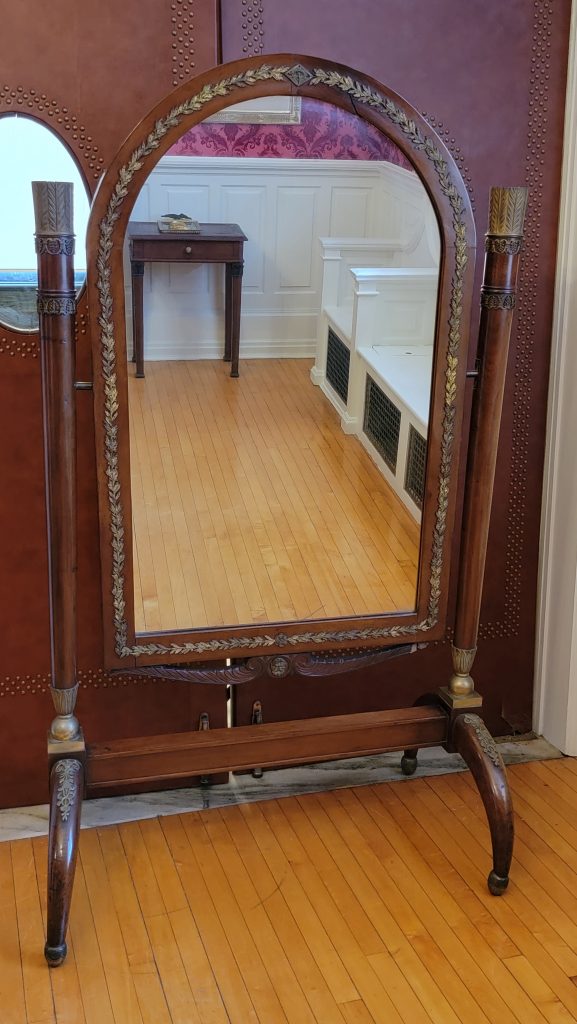 Made ca. 1815 with ormolu mounts that are designed with leaves, berries, and human masks. The gilt finish is quite tarnished yet appears original. The artist or creator is unknown at this time.

In 1918, Emma Flower Taylor presented the library with a traveling case that was once in possession of Napoleon Bonaparte and was in daily use by him. The traveling case contained his hand mirror, boot jack, and a pair of boot hooks. The mirror and boot jack being beautifully made of mahogany and richly inlaid with decorations of brass and mother of pearl, the mirror having closed armolu mounts, the whole fitted into a flat mahogany case with brass inlays made by Fountaine. It is a fine specimen of French marquetry work and is currently not on display in the Napoleon Room.